CPU vs vCPU – What’s the difference? 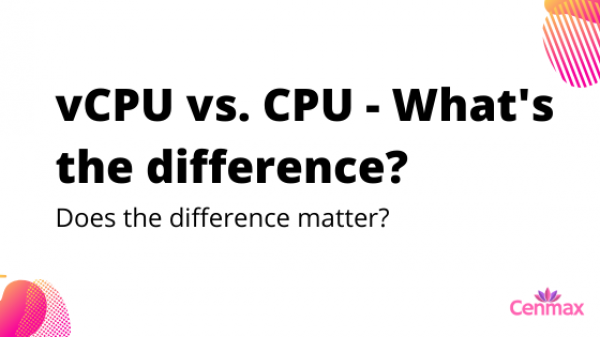 The Internet is filled with a lot of confusing words. Most of them might sound familiar than they are. You could have come across a lot of cloud companies who would have shown you a count of vCPU they will provide with each kind of VM. What is vCPU and what’s the difference between CPU core and vCPU core?

All instructions that you give to your device is received and processed by the processor. Including mouse, & your keyboard. It takes the input and processes it. Like operating an application, making a change on Hard Drive, etc.,

The way your computer can contact your processor. It has a tube-like structure that enables data transmission between your components and the processor.

Here comes our question for which we’re seeking an answer for.

In the past, processors came with only one thread per CPU core. So operating systems were designed in such a way where they assume that each of the CPU threads is a different CPU core.

Intel started to offer its processor range with 2 threads per physical core. Like to say, for a 2 core processor, they gave 4 threads.

When you insert such a processor to your computer, for example, let’s say a dual-core processor. The computer identifies it as a 4 core processor.

CPU core, always. That’s what the true power is whereas vCPU is just an illusion for the operating system.

Whenever you buy a server or a VM, most companies display vCPUs. They won’t tell you exactly how many CPUs you get.

At the time of writing, 1 vCPU means 1/2 of a CPU Core. This might change as time evolves.

So wherever it is possible, go with a physical CPU core when your priority is the performance of your application.

If you’re buying a VPS, you’ll more probably get a vCPU core and in case of a Dedicated server, you’ll get a CPU core.

Hope this post was helpful in making your decision and in gaining additional knowledge. Need support? Don’t forget that we’re here 24×7!

Cenmax is trusted by 3500+ Enterprises across the Globe. Join our wonderful family today!